I have written numerous posts about how we like to turn any time into an adventurous time with our kids. Any trip, even a trip to run errands, can be a field trip where a learning experience can happen. On this particular day journey we experienced three things: History, Nature and Engineering Ingenuity.  Have fun reading and remember that you can turn any trip into a learning experience too! 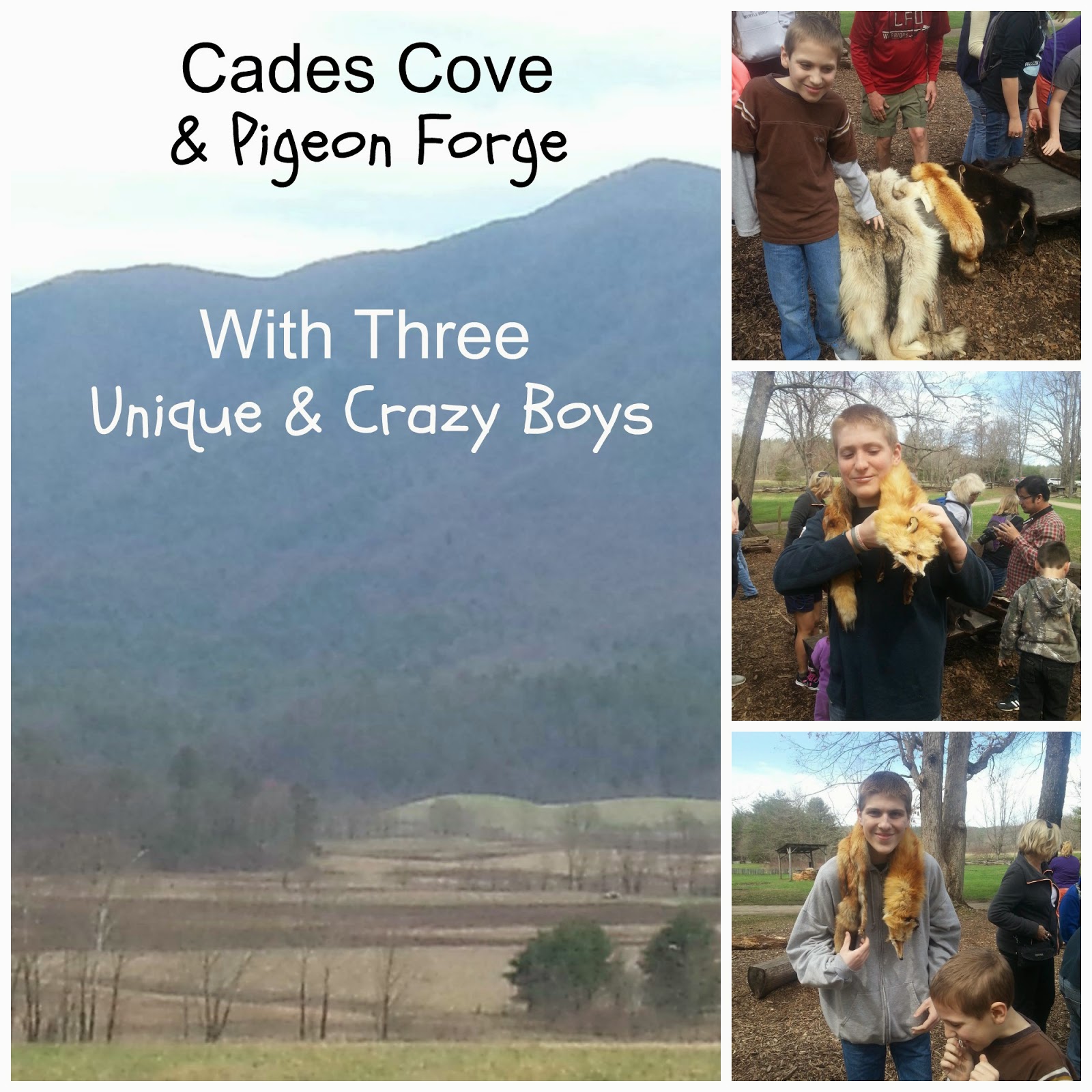 We are very blessed to have Sarah's mom live close to Oak Ridge, Tennessee. Oak Ridge is a unique town in and of itself, but is also very close to Knoxville and, of course, The Great Smokey Mountains National Park and the tourist towns near to it.

We love going to the Smokeys, especially to Cades Cove and today was a beautiful day to go. It also was a day ripe with opportunity for each one of the boys to show their unique personalities and their favorite things. 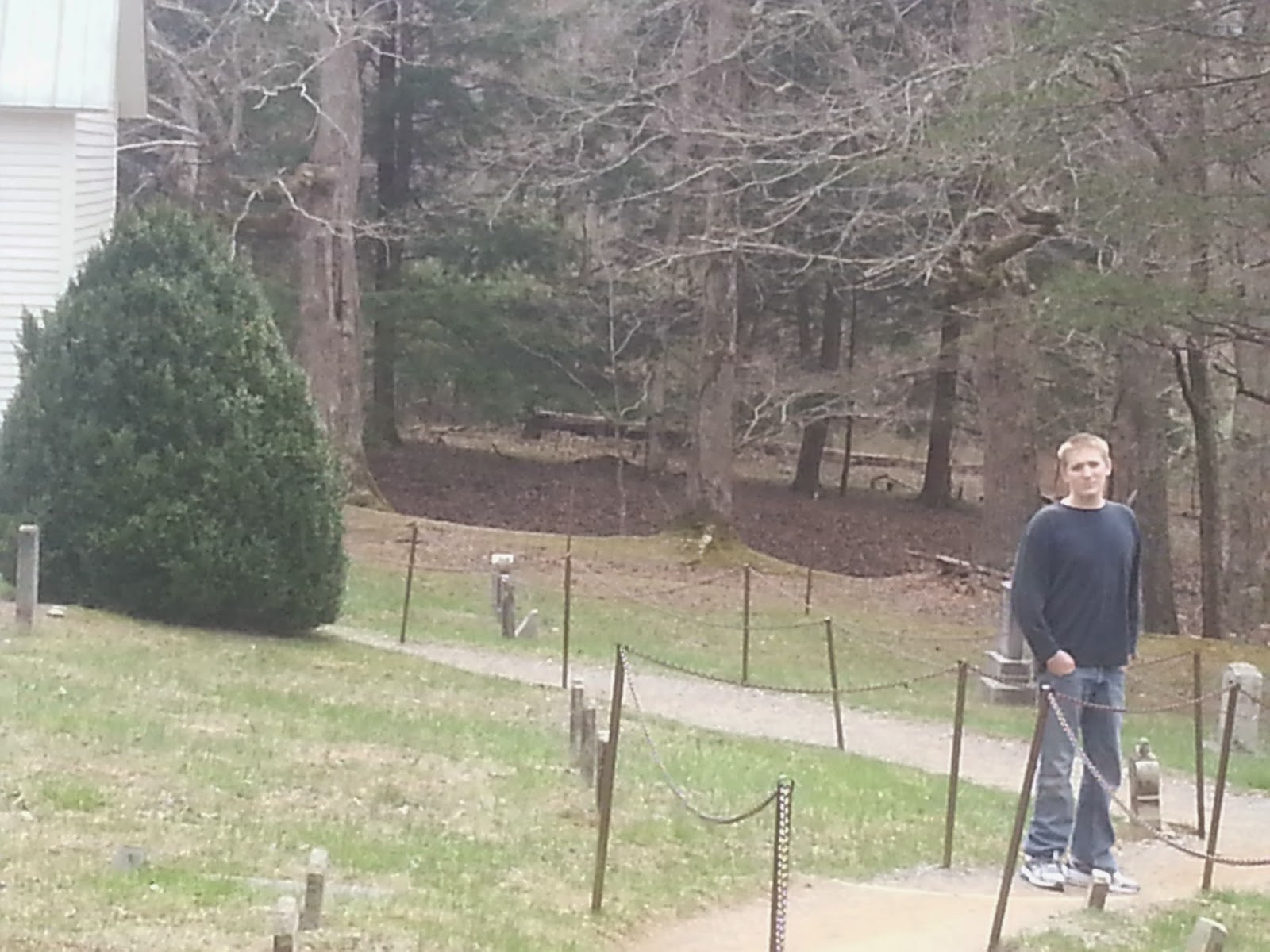 Joshua went through a short stage where he was fascinated with cemeteries - especially old cemeteries. Well, he has since moved on to other fascinations, but, as with most aspergers kids, once they've had an interest in something, the interest never totally goes away. We've explored the old graveyards in the cove before, but, today, he wanted to stop by one again. No one else wanted to explore, so it was a great occasion for just Joshua and me to spend some time together. I was amazed at the little things he remembers. As we were walking he mentioned that one of the graves up ahead has a picture of the person buried there on the grave marker. Sure enough, a few steps more and we saw it. He was very pensive and a bit sad as we looked at the head stones. He seemed to spot every marker where a child was buried. One section was especially somber as there were two tombstones side by side. One was for a baby girl born in September of 1916 and died two months later in November. The other was for a baby boy, brother of the little girl. He was born October of 1917 and died January 1, 1918. Two years in a row a mother gave birth to a baby only to lose the child a few months later.  Joshua and I had an interesting discussion about how hard life was back in those times for people who lived in the cove. It wasn't necessarily a depressing and morbid time that we spent walking, just a time for each of us to be together and reflect together. It was a good and special time. 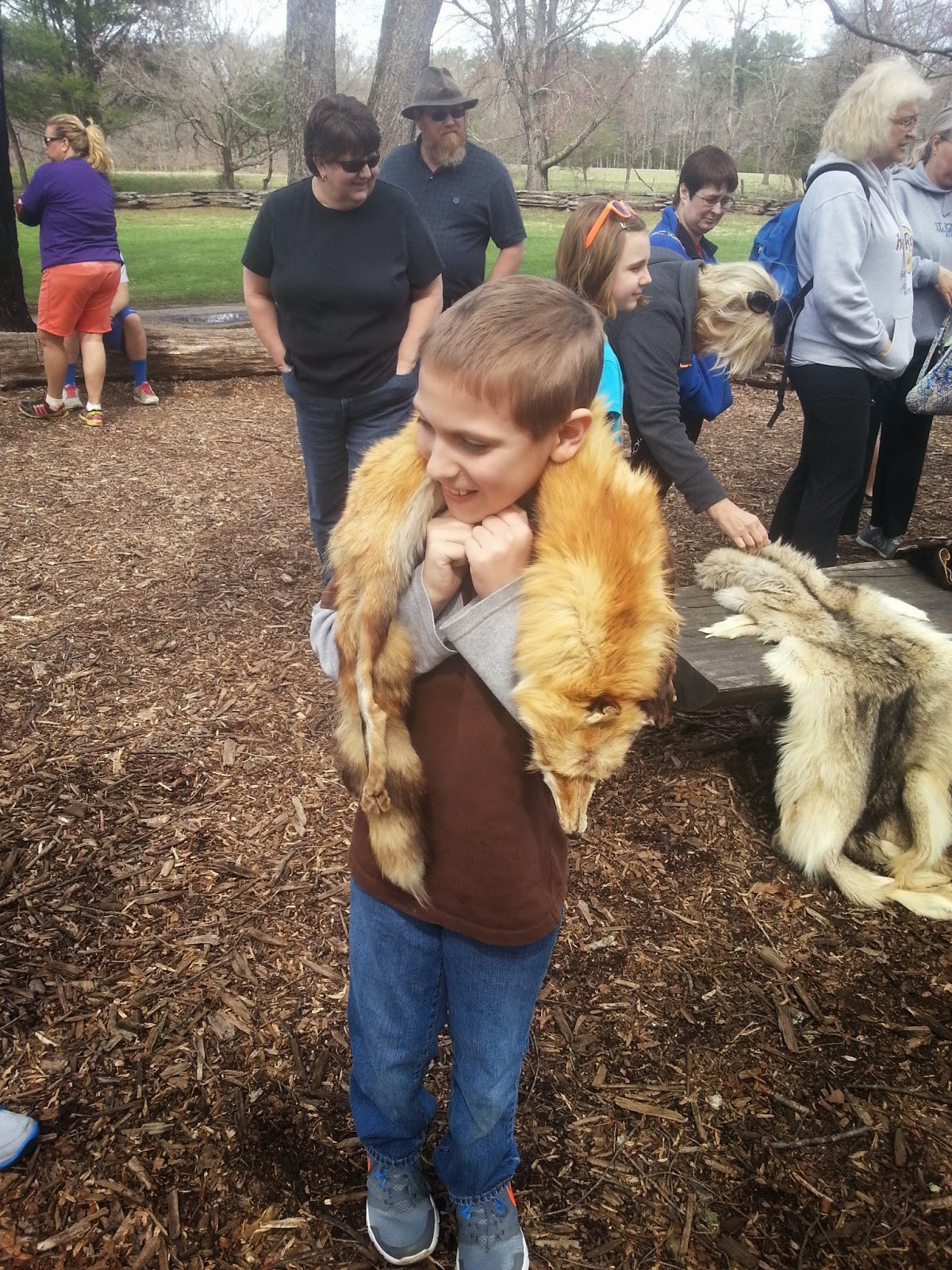 ﻿
A few miles further down the road we stopped at one of our favorite places - The Cades Cove Visitors Center. Although we knew it was Saturday, we had forgotten how much weekend activity there is at this beautiful spot that contains an old mill, forge, a settlers cabin and other historic buildings as well as the Visitors Center and shop. Today they were also having a lot of demonstrations and nature classes. We were blessed to make it just in time for the "WILD Program" which is a short talk on the wild things in the park. First a ranger talked about what the National Park Service was all about then another ranger set out several pelts and furs from animals found in The Great Smokey Mountains National Park. As she talked about each animal and pelt, all three boys were fascinated (as was I) but Jacob was especially enthralled. He is our resident animal enthusiast. Afterward, the ranger invited us up to touch the furs and ask questions. We were even permitted to try on the fox fur which, although from the park, was almost 100 years old and originally made to be a ladies stole. Later, Jacob wanted me to ask one of the workers how to become a National Park Ranger and then I bought a Junior Ranger Program book from the shop so that he could work on the requirements to become a Junior Ranger. Hmm. . .my son the National Park Ranger. . .I kind of like the sound of that. 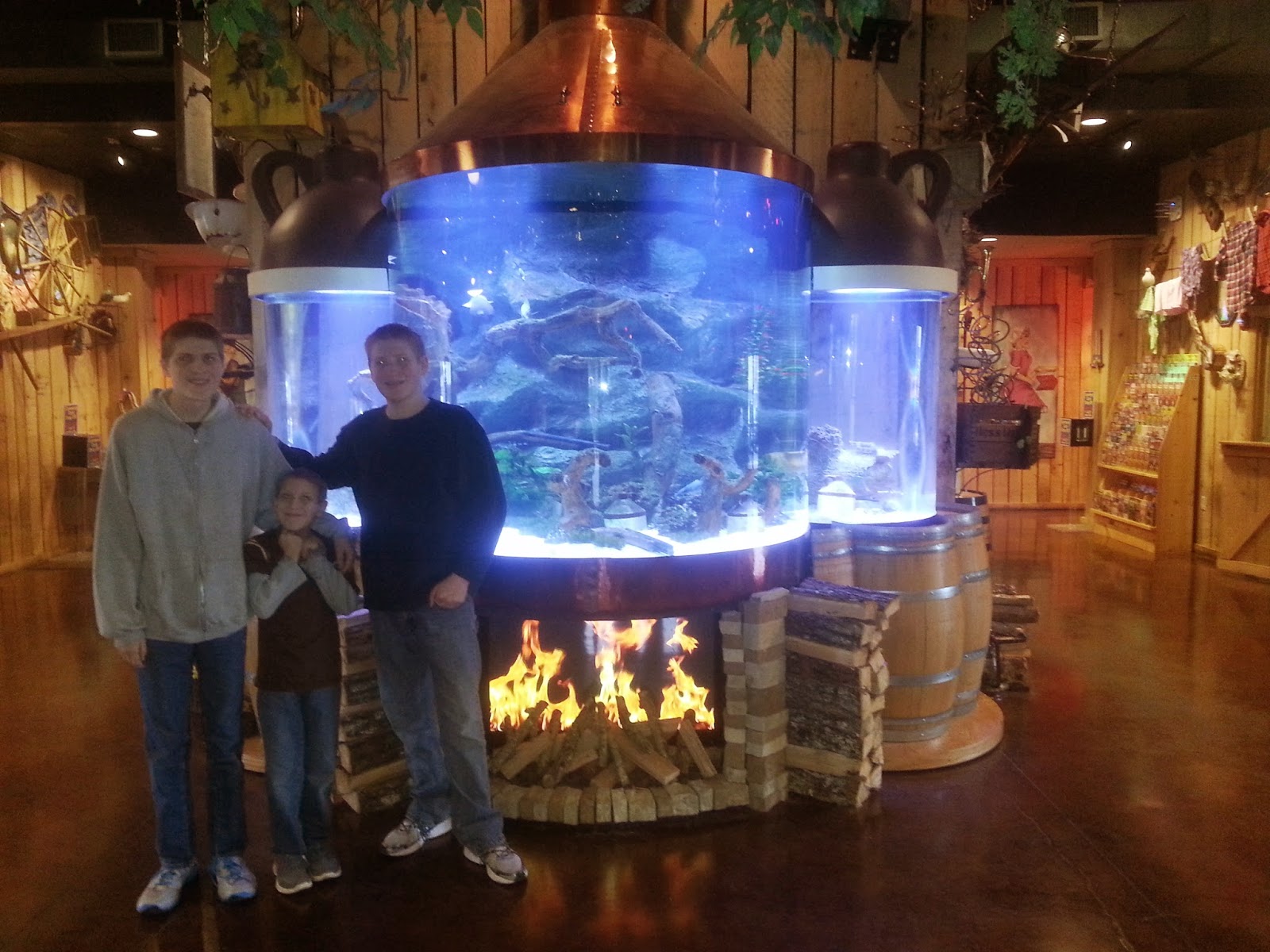 As we were finishing the Cades Cove Loop the topic of discussion turned to what to do next. The day was still young so we decided to drive through Gatlinburg and Pigeon Forge. When we mentioned Pigeon Forge, John Allen's ears perked up. Somehow, John Allen has become a fan of the Animal Planet television show "Tanked" where a group of aquarium builders are hired by different individuals or businesses to build a custom aquarium. John Allen remembered one show in particular where they were hired to build a special fish tank for the Hatfield and McCoy Dinner Show in Pigeon Forge and asked if we could stop by. So, off we went trying to find the dinner theater. We drove through part of Pigeon Forge and then Gatlinburg and finally decided to look the address up on my phone and plug it into the GPS. Soon, amongst great excitement from the boys, we arrived. The outside is fascinating by itself with live animals, porches with rocking chairs, and an outhouse that talks to you as you look in, but, then, you arrive in the lobby/gift shop area, and there stands the tank. It is shaped as a giant moonshine jug. All three, but especially John Allen, were thrilled to actually see a tank that was designed and built by the Tanked builders. Hey, I even thought it was pretty cool!

So, how much did this fun filled day cost? Well, outside of the gas and the picnic lunch that we bought at a grocery store, it was absolutely free. NO! I take that back. I spent $2.50 on Jacob's Junior Ranger book. So, there you have it - $2.50! I think it was money well spent for a great day with Grandma, Sarah, and especially our Three Unique and Crazy Boys. 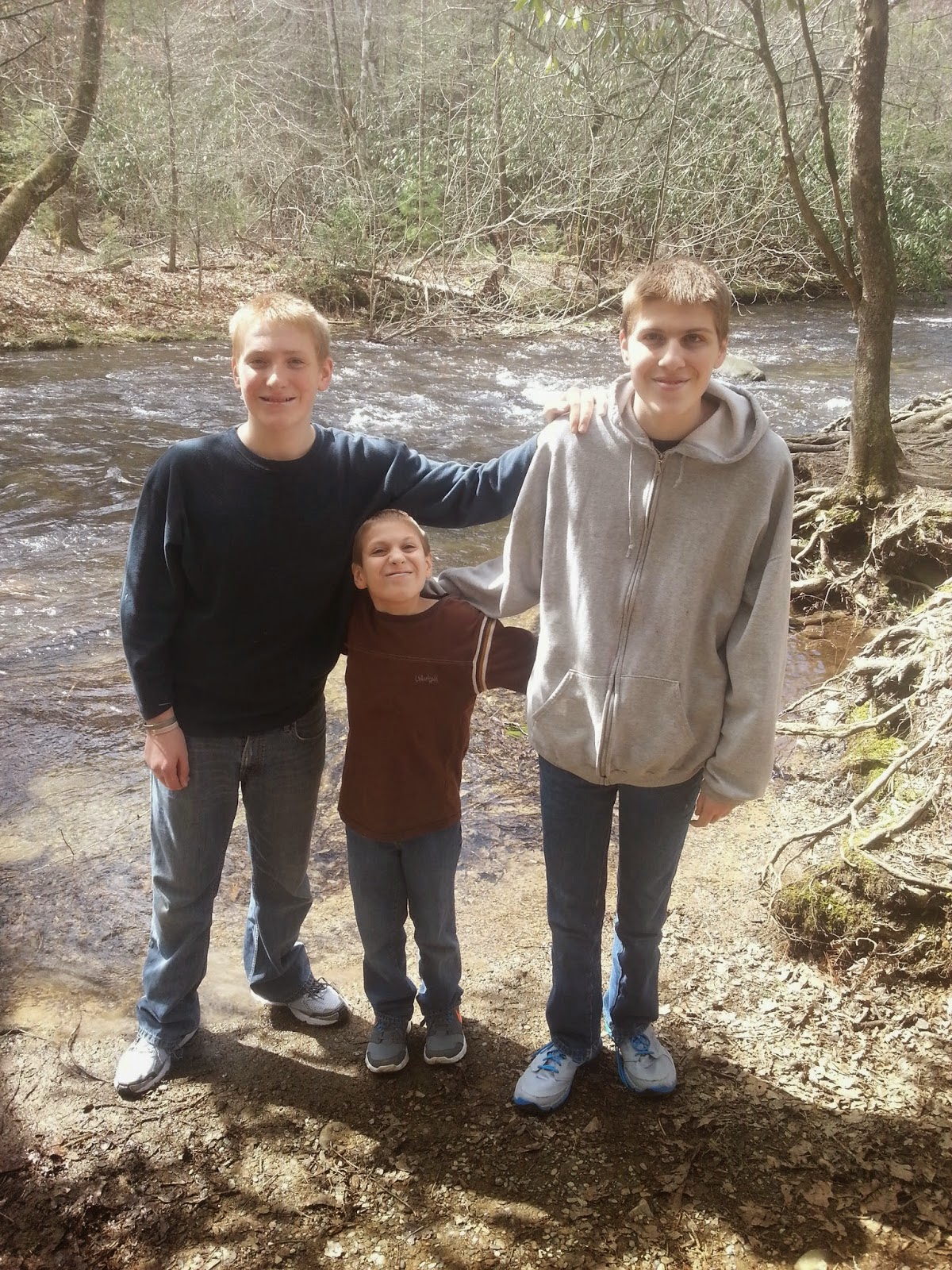 If you want to find out more about any of the places we visited and make some memories with your unique and crazy kids just click on the highlighted links above.
Have fun and leave a comment to tell me all about your special time!

I also participated in:

Please click the above link and check them out!
Posted by Tim at 10:05 PM

Verse of the Day